Bloatware and other clutter 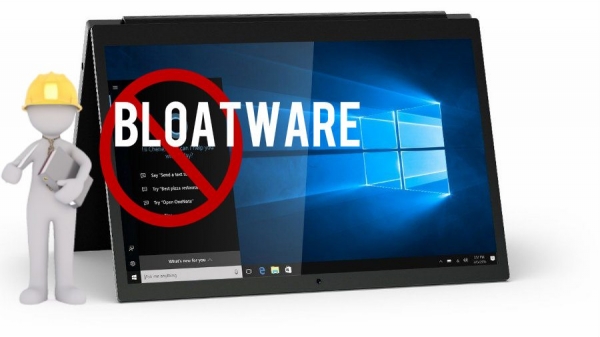 Bloatware and other clutter
Bloatware has two specific meanings: Firstly, it is software that has unnecessary features that use large amounts of your computers resources and has become so unwieldy that its functionality is drowned out by its useless features. Secondly, it is a slang term for the numerous programs that are pre-installed on new PCs, many of which are limited trial versions designed to entice new users to buy or subscribe. That’s what we are going to talk about.

Let’s start with a bit of name and shame: HP, Acer and Toshiba are just loaded! Does anybody know what Toshiba Reeltime is; or HP Jumpstart; or Acer Grid Vista? … I thought not! Manufacturers usually get paid by the software companies to install this stuff, as well as trial versions of Internet Security products such as Norton and McAfee, so if you use the program you must subscribe and the vendor gets a kick-back. Further insult is added when manufacturers add their own “utilities” that add little to the end-users experience. If you load a clean version of Windows its doesn’t come with all this clutter and the computer works so much better without it.

So what’s to do? Simply put, you can pretty much uninstall all of it using the control panel, programs & features section. If a program has the manufacturers name against it and it doesn’t say “driver”, then get rid of it. What’s the worst that can happen? Just go their website and download it again! Windows 10 will usually recover from a removed driver automatically so don’t worry too much about getting it wrong. Many uninstall programs ask you to restart your computer or laptop afterwards but you can ignore this if you are removing lots of programs … Just restart you PC when you’re finished.

Some bloatware is now embedded within Windows as an App: No problem, just right-click on the app and choose uninstall from the menu: Happy Days! I hate to think how many hours I’ve spent removing clutter from new and used computers, but its always satisfying as the computer performs so much better without it. Lastly, don’t be tempted to download free internet ‘clean-up’ utilities, or buy them from your antivirus company as they just clutter up your computer even more and do little to really make things better.

I am delighted to say that our standard service includes de-cluttering and all new computers get the treatment before delivery but, as always, if in doubt or if you need help, you know where to come!