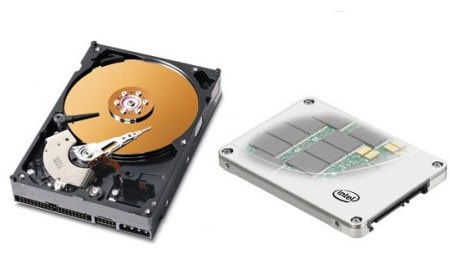 Shall we start with a quick explanation and definition of what a hard disk is … it’s an electro-mechanical data storage device that uses magnetic storage to store and retrieve data using a rotating disk coated with magnetic material. Imagine, if you will, an old record player with a vinyl record and pick-up arm; well a hard disk is just about the same except its all in a case and works a whole lot faster … and you can read from it and write to it. Don’t confuse it with memory (RAM) that is temporary storage used whilst the computer is processing.

So, your computer has a hard disk in it to store the operating system, programs and your data, and when you turn it on, the computer loads what it needs from the disk and stores what you’ve done when you’ve finished. Just like a library, it has space where all the files are stored and an index of where everything is so that it can be accessed quickly and efficiently; the speed with which your computer does this is determined by the type and speed of the disk. Older disks (pre-2004) are probably IDE (or PATA) type that used a wide ribbon cable to connect to the computer, we still see these occasionally but, they’ve just about all been replaced by the newer SATA disks (Serial Advanced Technology Attachment for those of you interested) that are much more manageable.

The development of SATA meant faster transfer speeds, easier cable management (smaller boxes) and the ability to connect multiple disks more easily. But these disks still have their limiting factors … the faster you spin the disk the faster you can read the data until the spinning causes the disk to wobble a bit and then you’ve reached the limit. As files have got bigger and we’ve started to store more data the demand for faster disks reached a physical limit and a new technology was needed … welcome SSD!

SSD (Solid State Drive) isn’t a disk at all, its just a load of electronics in a box the same shape and size so that we can easily fit them into existing computers and laptops. There is no spinning disk, no motor, no pick-up, no moving parts at all, and because its all electronic it can be accessed at almost the same speed as the rest of the computer. The SATA connection is still used but this has been upgraded to facilitate even faster transfer speeds. New computers are now being made without even this functionality as the SSD is built-in along with the RAM and processor … fully integrated!

However, we’re still a way off this and many new computers are still supplied with the older mechanical disks today and I would see this transition taking at least another five years or so. In the meantime, you should consider making sure that your new computer has an SSD even if it’s a bit more expensive … or have it upgraded immediately as its well worth the money. If you’ve got an existing machine that’s running slow then the probable cause is the older hard disk lacking in performance. Over time the bearings in the motor and the pick-up arm wear a bit and become less efficient causing a slowing down in the transfer of data. The solution is to upgrade your disk to a new SSD, a simple and pain free copy of your existing disk will give your ailing PC a whole new lease of life!

As always, if in doubt or if you need help, you know where to come!