But what do we actually do all day? 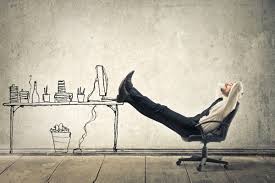 There is a care home not many miles away that wanted wi-fi throughout the building, so I went along and surveyed. I worked out that we would need 3 cables routed around the outside to feed 6 access points around the home. The quote was accepted and the cables installed. I then returned to connect it all up but it failed to work, and after much testing we found out that the access points didn't like working in pairs and that they set-up interference between each other. I had to go back with a different brand and all worked fine. Despite the best intentions things don't always go as planned!

I recently went to Blandford to repair a broken monitor. I turned it on! Need I say more?

A fair sized local organisation caught a nasty ransomware virus contained within an email despite having the best email filtering system, despite having a network firebox with built-in security, despite anti-virus on the PC And despite the owner being bright enough to have known better!. The virus encrypted all the data on his PC and then went on to encrypt the data on a network storage device and other shared data. We successfully stopped and removed the virus, cleaned the system or encrypted files and recovered 99% of the damaged data from cloud backup … All within 24 hours. If you're a business or individual with valuable data or just family photographs you cannot have too much backup!

We sold a new laptop system to a nice couple who had downsized and wanted to get rid of their PC, screen, keyboard, mouse, scanner and printer. We installed the laptop downstairs in the kitchen with the wifi, and a wireless all-in-one printer in a cupboard upstairs. No clutter and also managed to get all their email and address books to synchronise with their iPad … Happy people!

Another local man, who shall remain nameless, was ‘cleaning up my PC’! He succeeded in deleting most of the operating system and start-up files along with a few other bits and pieces. Sadly we couldn't put it back together, but we were able to get all his data back and then re-install his operating system from new!

And finally, a man gave his young daughter his old iPhone when he got a new one. He spent hours transferring all his stuff but forgot to turn off the sync between the two phones. When his daughter found hundreds of unwanted contacts and emails on her phone she set about deleting them all … He watched in horror as his stuff magically disappeared from his new phone, seemingly by itself! Again, cloud backup got most of it back again.

I don’t think that any of the national chain stores or internet wholesale outlets can offer a service like this so, as always, if you need help, you know where to come!